Years ago, magic was a harnessable force which was taught in a school named The Aikonian Institute of Magical Research and Application. The Institute’s Council of Mages were tasked with protecting the kingdom and learning how to use these potentially destructive forces for good.

Unfortunately, the use of magic was having a negative effect on the world of Aikonia, something that some of the Council members were hoping to remedy while working with a being from an alternate plane of reality. Sadly, not everything is as it seems and some things did not go as expected, leading to a series of unexpected events to unfold.

Centuries later, a group of hopeful adventurers, along with a set of unlikely allies, have uncovered a secret from the past and triggered an event that threatens to change the world they live in.

The story of Aikonia takes place in a world made up of several planes of existence. Magicka (the world of magic) and Aikonia (the world of man) are two of those planes. There are also two types of magic in Aikonia: Life magic, which is powered by the life energy produced by living beings, and Magicka magic, which is powered by an energy produced when the atmosphere of Magicka reacts with that of Aikonia.

Mages in Aikonia harness that energy by tapping into the Veil, an invisible and intangible boundary between Aikonia and Magicka. Those who have the ability to bring the atmosphere from Magicka into the world and contain the resulting energy are known as Channelers and those who are able to shape the energy into magical spells are known as Casters. Those with the ability to do both are called Binders. 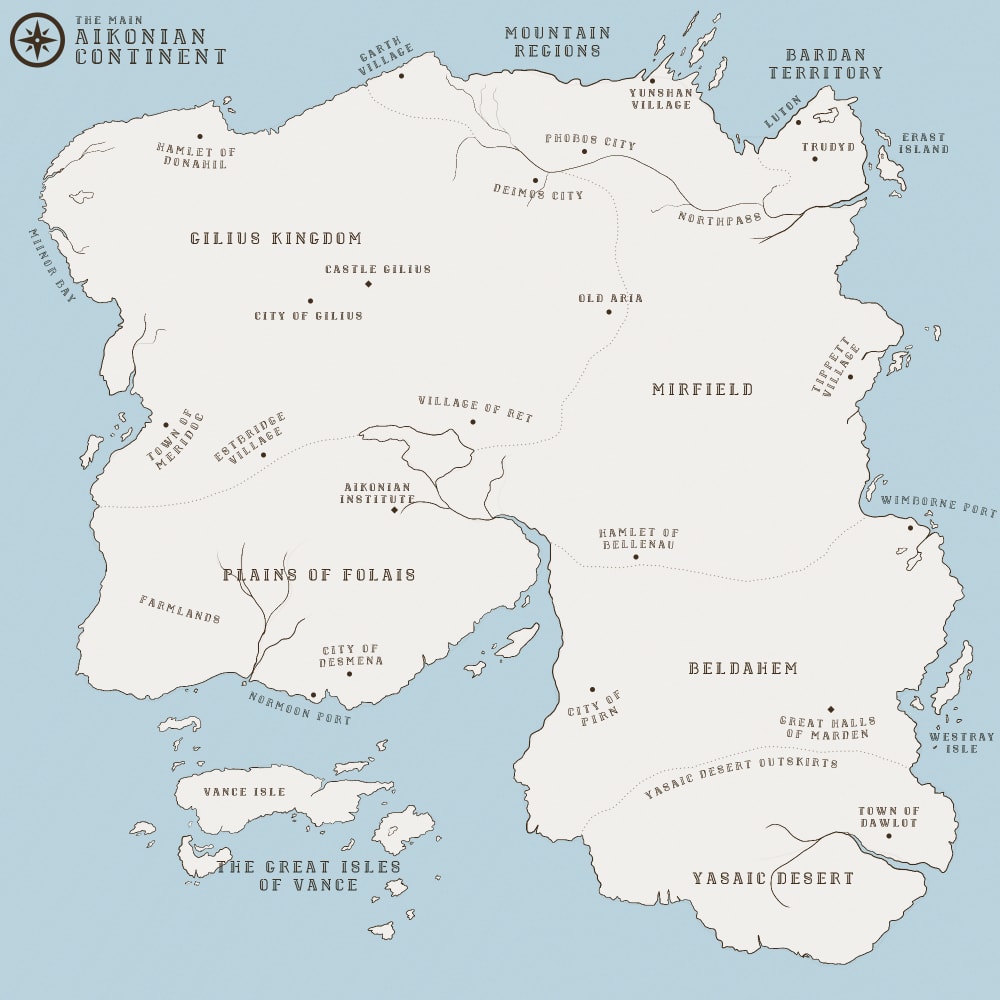 Created in 2010, Aikonia is an on-going fantasy adventure webcomic that updates every Monday. Aikonia is currently run and created by Andrew-David Jahchan, David Baron, and Alexandria Smith. We also tell side stories that take place in the world of Aikonia in the form of journal entries, although the current journal series is on hiatus. If you’d like to help keep Aikonia alive, you can support us by becoming a patron on Patreon!

Other Places You Can Read Aikonia

Yegir has never been a bardan to mince his words. When a situation is not to his liking, he makes his opinions known using either his words or his massive Zweihander. As a child, it was this bluntness that earned him several lashings and the friendship of Katherine and Steffan. Yegir revels in the thrill of battle and prefers to fight multiple enemies at once, a preference that has lead to severe injuries on more than one occasion.

Steffan is a good-natured fellow whose love for his friends is only surpassed by his love for his shield. A creature of habit, Steffan always takes the night's first watch where he spends hours cleaning and mending his shield's battle scars. Despite the constant need for shield repairs, Steffan does not begrudge the scrapes he finds himself in. He would happily follow Katherine to the ends of earth and back, a trip they've now made three times.

With her razor-sharp wit and excellent knack for handling sticky situations, Katherine naturally fell into the leadership position of her group. Katherine grew up together with Steffan and Yegir in a small farming village. When the town fell on hard times, it was Katherine who suggested they seek their fortunes elsewhere. Over the years, she has developed what Yegir has called an "interesting" fighting style. She primarily fights unarmed, manipulating her environment and tackling her opponents head on.

With Pirate Lord and captain under his belt, Dobhar was not always the confident man he is today. Dobhar grew up a poor young lad on the streets of Normoon Port. Along with an old friend long forgotten, the two chased dreams of magic and world seeing. Unfortunately, a pirate raid along the port forced Dobhar to fight for his life along the others kidnapped into servitude. Through determination and cunning, Dobhar eventually worked his way up from slave to first mate. A well timed mutiny ended with Dobhar gaining the title of captain and Pirate Lord from former Pirate Lord Onyx and thus began his time as Captain Dobhar the Fury.

Some would describe Dunstin as reserved, quiet, or introverted. Yegir would describe him as grumpy. Dunstin rarely speaks to the other members of the group, preferring to work in silence. Dunstin joined the group out of necessity rather than the pursuit of adventure and glory. He was hired for the group's latest expedition to carry the majority of the equipment and supplies, and as such, he tries to avoid combat situations.

Jarvan was hired by the group for this quest, but truth be told, he would have left the city of Desmena without pay. While his expertise in trap detection and disarming, lock-picking, and general sneakiness proved valuable assets when exploring ruins, those same skills had rubbed some very important people the wrong way. Knowing how far the reach of his old enemies extends, Jarvan hides his past beneath a layer of cocky bravado and careful avoidance of any in-depth discussions with other members of the group.

A low-ranking mage, Cyril was sent out to handle a routine pest problem when he stumbled across something much more serious. Now he's been swept up in events outside his control.

Arwel is a new student and good friends with Derron and Gwynne. He has been told his whole life that he has a talent for magic, which he hopes to develop at the Academy.

Gwynne is good friends with Arwel and Derron. She intends to travel the world in search of rare magic and forgotten spells, and has come to the Academy to study and train for this end.

Derron is one of the new students at the Academy. His uncle was once a celebrated Mage, and he hopes to follow in his footsteps. He's been good friends with Arwel and Gwynne for years.

Callisto has dedicated his life to the council, usually at the expense of his personal life. He had a family once, a long time ago, but he refuses to talk about it. He is one of the strongest magi on the council, but sometimes acts before thinking.

Before his untimely death, Syd was the youngest and newest member of the council. He had shown an impressive magical talent and was usually the first magi consulted over technical magical issues. He was often awestruck by the other council members and kept his distance, but had found himself getting closer to Ariel.

Solaris is currently the head of the Council of Magi. He prides himself on being fair, calm, and cool-headed in even the most stressful situations, however, he can be ruthless, strong-minded, and at times dangerous. Most council members trust his judgement - a trust he has earned over many years.

Although he keeps to himself most of the time, Enceladus will often help other magi with various tasks. Quite intelligent, he spends lots of time reading, and is the one to ask on historical matters. He's particularly self-conscious of his height and is often trying not to loom over others.

Ariel has served on the council longer than anyone else, besides Solaris. She is kind-hearted and compassionate, and usually gets along well with everyone. Many magi have sought her council when Solaris is unavailable.

After nearly a decade of hard work, Mar was finally chosen to join the council a few years ago. She can be as ruthless as Solaris at times, and often keeps to herself, but she's not above questioning her peers or calling them out from time to time. She would never admit it, but she thinks she would be the best choice to replace Solaris as leader, should something happen.

Quiet and calculating, Deimos is constantly looking for challenges to make him stronger. He believes in power over all else, and will pursue his goals single-mindedly. Solaris considers him a trusted protector, but Deimos is usually only looking out for himself.

Andrew-David is a game developer, designer, and is the creator of Aikonia for some reason. He is also the co-founder of a tiny game studio called Wild Gamut!

His natural environment is at his desk, where he types code while pretending to know what he's doing. He called his cat "Kitteh" because he sucks at naming things (Aikonia is literally "Nokia" backwards, plus two letters).

David Baron is a freelance artist & animator from Tampa, Florida, USA. He worked on Cartoon Network's Mighty Magiswords as a character/model designer and is currently also an assistant animator for JaidenAnimations on Youtube.

His artistic goal is to create positive and expressive work that can be enjoyed by anyone. His love for art and animation is rivaled only by his love of dogs.

Allie Smith is a freelance writer from San Diego, California, USA! She's written for many one off projects over the last eight years and for the webcomic, Supernatural Sleuths. Allie loves writing under a bright sun and next to her husky, Sasha, and her cat, Sweet Pumpkin. Unfortunately for her they don't get along too well.